The phrase “an elephant never forgets is wrong!”

Is it more useful to never forget or to simply remember?…

So… an elephant may not forget you but can you forget the elephant?

What I am about to tell you is something you have probably heard before but possibly never really contemplated.

Heed this one rule and it will make a dramatic difference to your life.

It is something often overlooked but thats because people don’t take the time to really correlate all the ways that this actually works.

This is a MAJOR life changer!

This is one of the ways how good hypnotists, NLP’ists, advertisers, promoters, politicians and other influencers get great results. They understand how much more powerful and influential the unconscious mind is (93% ruler of all your decisions) versus the conscious (the little 7% that ‘believes’ it is is control right now).

The unconscious mind cannot generally translate or decode multiple layer language information the same way as our conscious mind can. Therefore modern coginitive scientists like Sean C Draine have shown through elaborate research, that if you subliminally present a person with a word preceeded by the word not; as in not clean or not dirty, the person wont first process the not – just the word clean or dirty.

The same is true when you subliminally preceed words with prefixes such as unor dis, such as unhurt or disloyal. People reacting at an unconscious level hear only the word hurt and loyal.

There are many documented and dissected cases where well known people used a negative, which unfortunately only affirmed the publics beliefs.

Such as Michael Richards who played Kramer on Seinfield, who called someone hekling him in the audience the N word. The next day he publicly apologized stating he was ‘not a racist’. The result was clear.

They didnt believe him anymore than they did not believe Richard Nixon, when he said he was ‘not a crook’.
What went wrong?
“I’m not a racist”, is simple for the conscious mind but the unconscious hears this as, “I am a racist.” Simple but unfortunate for Richard Nixon.

So back to the hypnotists…. a good one will know this. We use it to our avantage. For example, someone wants to stop smoking – we dont say.. “dont smoke”, instead we might use, “you are now smokefree,” or something of the sort.

Have you ever wondered why we often do something we are told not to??
Think of a child. “Don’t do that.” … does it prove effective? Does “Stop!” work better?

Giving a direct command is much easier for your unconscious to process and hence much more effective.

Think… “dont throw that rock” versus “put the rock down.”
“Dont think of your ex,” versus ” what type of partner would you like to meet?”
and the biggie … which resulted in me writing this today….
“Dont forget!” versus “REMEMBER“….

Which do you now think works better? 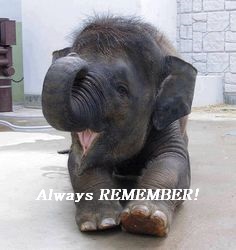 Remember to dont forget or dont forget to remember…. lol
and lets change the elephant quote now to …
“An elephant always remembers.”

Keep it in mind… (get it?)
Danielle x

P.S: Ready to LEARN MORE ABOUT YOUR COMMUNICATION?
Join us here at THE NLP PRACTITIONER!